The origin of Develosil ODS Column!!

Six kinds of ODS columns released it approximately 30 years ago. “Developing new ideas based on study of the past.”

All began in here.

The width of the selection to its maximum    !!

Six kinds of ODS is used to a purpose. As for it, the choice of the column which is most suitable by the action of hydrophobicity and a left silanol group is possible.

When the column is selected, it is necessary to know the performance of the column enough. I will compare it from hydrogen bonding, hydrophobicity, plane recognition characteristics what kind of performance six kinds of columns have here.

When prescribed our company examines the performance, the hydrogen bond is evaluated by using the separation coefficient of the phenol as caffeine. It becomes a high value when there are a lot of silanol groups that remain, and when it is few, this hydrogen bond indicates a low value. That is, the column by which the end cap is fully processed is in the tendency for the value of this hydrogen bond nature to be small. Although it is not only influence of a residual silanol, it is certain that it is one of the indices.

I evaluate the hydrophobicity using a separation coefficient of benzene and toluene in our predetermined performance test. Indicating the price that is high so that this hydrophobicity has much carbon content show a tendency, but various factor is piled up, and cannot compare the presence of the end cap only with carbon content unconditionally.

It is known that the residual silanol group affects the shape of the peak in the analysis of the basic compound greatly. To evade this, the carbon content such as ODS, ODS‐k, and ODS‐T selects the one that the end cap processing is done high. Hydrophobicity is a high column in ODS, ODS‐K, and ODS‐T for this. It can be said that it is a standard so‐called column. 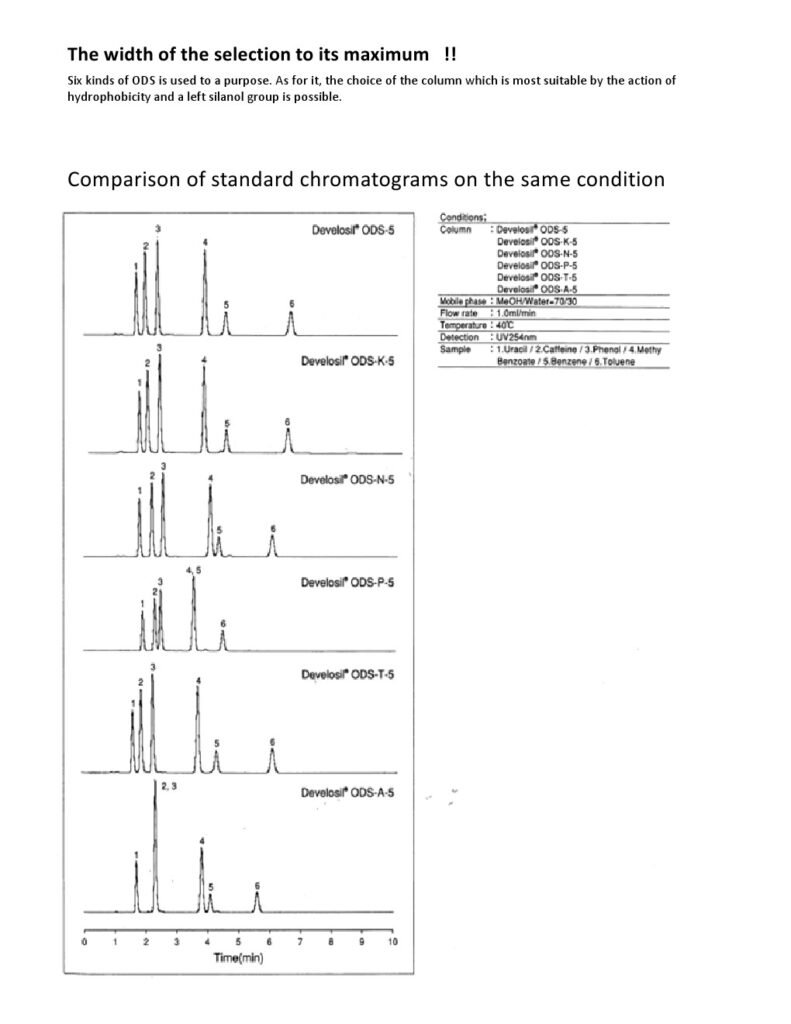